Tesla up 40% in 2 days. Amazon through the roof. Shopify worth C$74 billion despite never having made a cent of profit. The S&P500 in record territory.

At the same time, Coronavirus shows no signs of abating. Hong Kong just announced that all visitors from anywhere in mainland China will be quarantined and the UK and Canada advised all of its citizens to leave China now. Not Wuhan, China.

Factories shut down, supply chains disrupted, hundreds if not thousands of flights into and out of China cancelled for at least 2 months. Tourism crashing all over Asia. 11 million Chinese visit Thailand each year for example.

What am I missing here ?

If this continues for another month, the world economy is going to be highly affected. Six months, disaster. Virtually every car manufactured must rely on components from China, not to mention computers, smart phones and every type of consumer electronic and electric device, as well as most generic drugs.

And the markets around the world seem to be ignoring the really horrible possibilities. There seem to be a lot of folks with FOMO – Fear of Missing Out, and driven by a lack of places to invest their cash. But frankly, if you haven’t made enough money over the past ten years, the chances of doing so in the next ten are pretty slim.  The average total return of the S&P 500 is 9% per year, while the average over the last ten (including 2019 which was an incredible 31.5%), is over 14%. Reversion to the mean tells us that return over the next ten years has to be about 4% per year just to average out. And that with some very difficult years including possibly 2020.

In the following illustration, the red line is 9%. 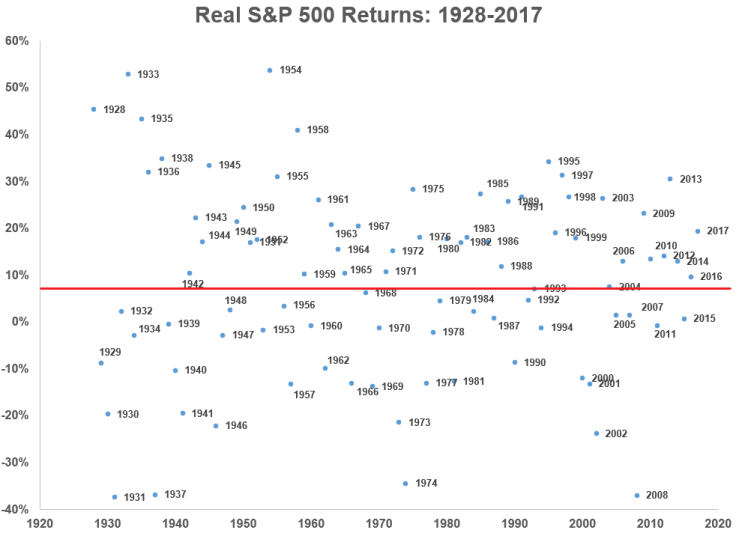 So what do we do to protect ourselves in case the worst does occur ? Even if the odds are small, the possible results are worth planning for.

Ray Dalio, Co-CIO of the largest hedge fund in the world, Bridgewater Associates, suggests holding some gold. The Global Gold Miners’ ETF XGD could be a good way to diversify risk and still have exposure to any potential gold price increase. Another possibility is Franco Nevada (FNV), which is a Canadian based royalty stream company with 60 current royalty streams from different mines and companies. Here is an interesting presentation on the company’s business model by CEO David Harquail:

Note however that both are up substantially over the past 12 months. Full disclosure – the author owns FNV shares.

David Rosenberg, writing in the Financial Post, says get long dated US government bonds into your portfolio. Turbocharged debt cycle will end miserably.

Several ETFs exist which allow one to own them easily, including BMO’s ZTL with a MER of about .17%. (Thanks to my friend Tim for the suggestion).

Rosenberg also says that this is the time to get ready for the coming downturn. But in all fairness, Rosie as he is known,  has been saying this for at least a year now. None the less, if one had followed his advice and bought long US government bonds a year ago, they would have made over 14%, about the same as the TSX.

One thought on “Has the stock market gone completely nuts ?”